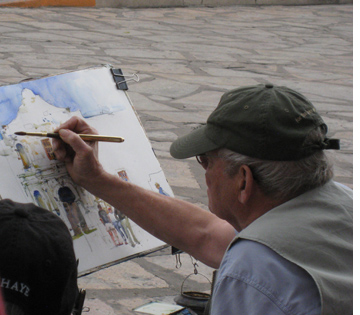 Charles Reid has long been considered a master of the medium of watercolor. His paintings are fresh and spontaneous, displaying his profound understanding of light and color and expert drawing ability. The viewer is immediately drawn into his rich compositions. His figures are beautifully rendered, in a simple, direct and natural, gestural manner that reveals his interest in painting the light as much as the person.

Reid was born in Cambridge, New York, and studied art at the University of Vermont and the Art Students League of New York. He has won numerous awards, including the Childe Hassam Purchase Prize at the American Academy of Arts and Letters, the National Academy of Design and the American Watercolor Society. In 1980 he was elected to the National Academy of Design. Public collections of his work include Smith College, Yellowstone Art Center, Brigham Young College, Roche Corporation, and the National Academy of Design. In addition to painting, Reid teaches workshops around the world. He has written eleven books on painting in watercolor and oil. Recent awards include a Purchase Award from Shanghai International Biennial Exhibition in 2013 and a Gold Medal from the Portrait Society of America in 2013.